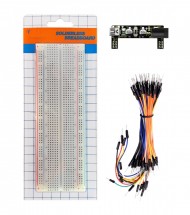 Breadboard A breadboard is a construction base for prototyping of electronics. Originally it was literally a bread board, a polished piece of wood used for slicing bread. In the 1970s the solderless breadboard became available and nowadays the term "breadboard" is commonly used to refer to these

Jump wire It's known also as Jumpers, A jump wire is an electrical wire, or group of them in a cable, with a connector or pin at each end, which is normally used to interconnect the components of a breadboard or other prototype or test circuit, internally or with other equipment or components, without soldering.

Brand: Chinese Model: mod-bb-PS
BREADBOARD POWER SUPPLY MODULE
OverviewThis is a power module for the standard bread board. Its concave design will not waste your proto zone. This breadboard power shield supports Mini USB power supply and power jack 7-12V supply. There are two independent power optional: 5V/3.3V. With this board, you can send power to both ..
25.00EGP
Add to Cart
Add to Wish List Compare this Product
Buy Now Ask Question
Quickview