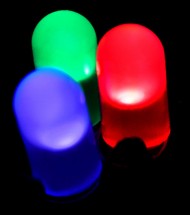 A light-emitting diode (LED) is a two-lead semiconductor light source. It is a basic pn-junction diode, which emits light when activated.When a fitting voltage is applied to the leads, electrons are able to recombine with electron holeswithin the device, releasing energy in the form of photons. This effect is called electroluminescence, and the color of the light (corresponding to the energy of the photon) is determined by the energy band gap of the semiconductor.

LEDs are produced in a variety of shapes and sizes. The color of the plastic lens is often the same as the actual color of light emitted,

but not always. For instance, purple plastic is often used for infrared LEDs, and most blue devices have colorless housings. Modern

high-power LEDs such as those used for lighting and backlighting are generally found in surface-mount technology (SMT) packages (not shown).

Brand: Chinese Model: LED-04
LED RGB 5mm
Description: Ever hear of a thing called RGB? Red, Green, Blue? How about an RGB LED? These 5mm units have four pins - Cathode is the longest pin. One for each color and a common cathode. Use this one LED for three status indicators or pulse width modulate all three and get mixed colors!The..
3.00EGP
Add to Cart
Add to Wish List Compare this Product
Buy Now Ask Question
Quickview