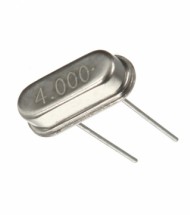 A crystal oscillator is an electronic oscillator circuit that uses the mechanical resonance of a vibrating crystal of piezoelectric material to create an electrical signal with a very precise frequency.This frequency is commonly used to keep track of time (as in quartz wristwatches), to provide a stable clock signal for digital integrated circuits, and to stabilize frequencies forradio transmitters and receivers. The most common type of piezoelectric resonator used is the quartz crystal, so oscillator circuits incorporating them became known as crystal oscillators,but other piezoelectric materials including polycrystalline ceramics are used in similar circuits.

Brand: Chinese Model: XTAL-2P
Crystal Oscillator 2Pin
A quartz crystal provides both series and parallel resonance. The series resonance is a few kilohertz lower than the parallel one. Crystals below 30 MHz are generally operated between series and parallel resonance, which means that the crystal appears as an inductive reactance in oper..
4.00EGP
Add to Cart
Add to Wish List Compare this Product
Buy Now Ask Question
Quickview