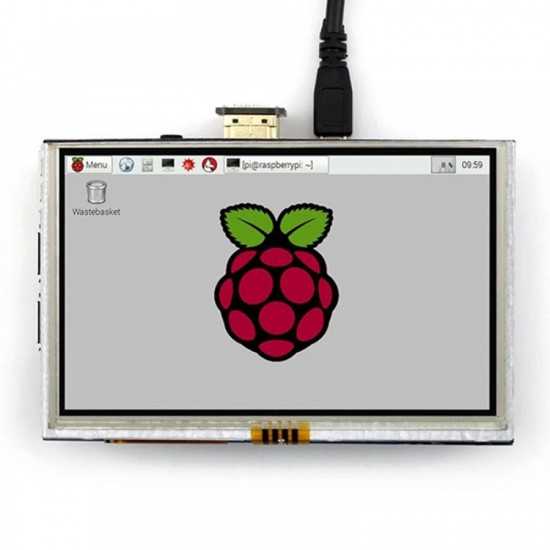 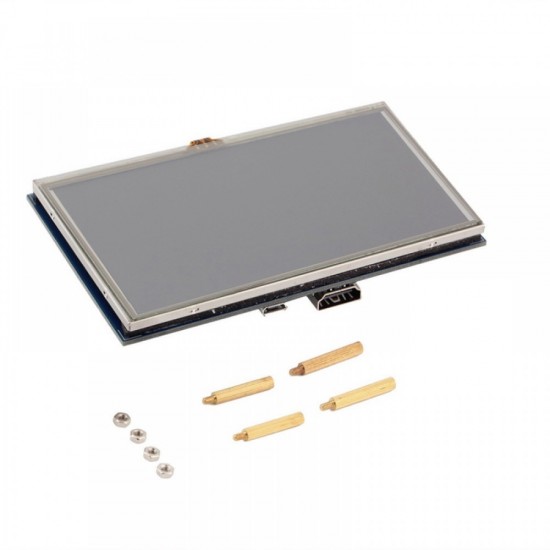 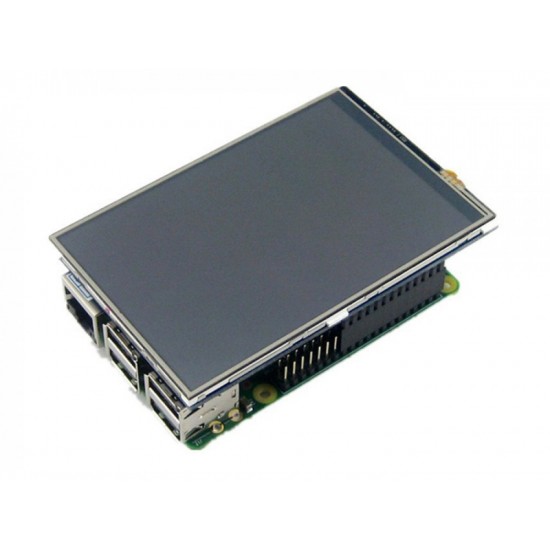 This display can be mounted on a Raspberry Pi 1, 2 or 3 via an HDMI connector, but requires additional driver installation.

The display has a resolution of 800*480 pixels and is diagonally 5 inches. On top of the display is a resistive touchscreen mounted for which a small stylus is included.

It supports 800x480 resolution. The capacitive touch function give the user full control over any device. It's driver free for your device due to built-in EDID device information, it is very easy to let the equipment correctly identified the touch screen. And the Capacitive USB touch screen can support functions of the right mouse button and drag and drop, and also support multipoint touch, maximum 10 points.(only test in windows 10)

Compatible with the Raspberry Pi 1, 2 and 3

For more information on the LCD screen, download the zip file with manuals under the tab "Downloads and Links".

We have only tested the display in combination with a Raspberry Pi 3B with the Raspbian operating system according to the following manual:

To install the driver, you need:

- Raspberry Pi 2B or 3B with Raspbian installed (via NOOBS!)

- An internet connection on the Raspberry Pi

- A keyboard and mouse (connected to the Raspberry Pi)

- An external display with HDMI that is plug-and-play compatible with your Rasperry Pi (e.g. a TV or monitor)

- A backup of your Raspbian operating system if it goes wrong! (especially the boot/config.txt file!)

Note:The installation of the driver overwrites the boot/config.txt file so that the display works correctly.

If you have previously made adjustments to this file, you will have to add these adjustments again after installation.

1. Start the Raspberry Pi in Raspbian (with TV/monitor, mouse and keyboard connected)

3. Set the read/write settings for the folder with the following command:

Note: Go directly to step 9 if you did NOT install Rapbian via NOOBS! (but used the standard image)

4. Go to this folder in the driver package:

5. Adjust the cmdline.txt file in the driver package (otherwise the RPi will stop running!). Use the following command:

7. Once adjusted press the "Ctrl + X" key combination, then the "Y" key followed by the Enter key (overwrites the file and saves it with the adjustment)

9. Go to this folder in the driver package:

10. Start the driver with the following command:

The Raspberry Pi will now restart and Raspbian will switch to the LCD screen as the main screen at startup.

To restore the default configuration, type and run the following command's in the terminal:

Note: After switching back to HDMI, the resolution may not be correct. We do not have a solution here at the moment except for restoring the backup.

The touchscreen will work fine at the moment, but perhaps it is still not accurate enough. You can do a calibration for this.

To do this, download the zip file with manuals under the tab "Downloads and Links". Extract the zip file and open the pdf file "How to calibrate the touch screen (En) .pdf".

Follow the steps described in this document to perform the calibration.

Raspberry Pi 5" TFT Touch Screen display
This product qualifies for free shipping
For certain Quantities of this product you may be qualified for free shipping or other perks, So kindly contact our Sales Representative to check that.
Products Sold: 0
Product Views: 22
Based on 0 reviews. - Write a review
1,000.00EGP
Add to Cart
Buy Now Ask Question
Add to Wish List Compare this Product